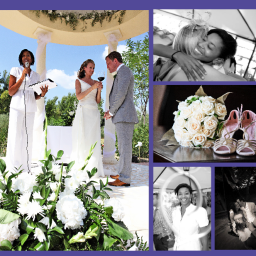 Natasha Johnson is one of the longest serving Wedding Celebrants on the Costa del Sol. Now in her 11th year as a Wedding Celebrant, she has helped over 700 awesome couples, including VIPs and celebrities to celebrate their marriage in their own way, on their own terms - just they way they want to! And with her awesome team, they do nothing by spread love and ceremony magic up and down the Malaga province.

More from the blog

How to elope and have an elopement in Ronda, Spain

Four top tips for having a celebrant-led wedding in Spain

So what is a Wedding Celebrant in Spain and how can they help you? From famous wedding guests to Fritz the dog, the summer of 2010 has seen a maelstrom of meaningful and beautiful wedding ceremonies around the Costa del Sol.

Not that I want to wish time away at all, but it just seems like each wedding season gets better and better and although I finish the season absolutely exhausted, I still can’t wait for the next. And if this season was a taster for next year, bring on 2011.

This summer I have married so many happy couples, and have loved the inspiration they have given me. It is so great to meet a couple from the outset and to hear their ideas for their ceremonies and then to see those ideas come to light in the most wonderful ways.

Back in April, I kicked off the season with Reg and Beatrijs’ wedding in Antequera. They had originally wanted a religious ceremony but found it could not be facilitated easily for various reasons and so decided to have a Humanist, non-religious wedding instead, so it was particularly satisfying to receive such lovely compliments from them after wards about how much they loved the ceremony and felt that it was very meaningful and heartfelt. A great way to start the season. Thanks, as always to the fabulous Michael and Laura from Andalucia Weddings.

I’ve had two weddings this summer at the beautiful Hotel El Cerro de Hijar in Tolox, courtesy of Maxine and Paul and Sandie and Stephen. Without them I would have never known such a wonderful, little venue existed. The hotel’s hospitality, the food and the breath-taking views of the Guadalhorce Valley were second to none.

Marieke and Johann’s wedding in June gave me lots of ‘firsts’ this season – my first wedding ceremony at Nikki Beach in Marbella, my first ceremony where the couples’ beloved dog was present and my first ceremony in English to an all-Dutch congregation!

It was a really special ceremony, with lots of emotion and laughter and wonderfully pulled together by Heather from Fiesta Sol and captured perfectly by Kris McGuirk.

They also wrote beautiful vows to each other in Dutch, and although I did not understand a word of them, the fact that both the bride and groom and their guests were in tears, was enough to tell me how emotional their vows were.

To add to the Spanishness of the ceremony they also took part in a ‘Arras’ – Spanish coin ceremony, which I have updated to make a little more modern. The couples pledge 13 coins to each other, each coin representing different states of being that they wish for their future lives together.

In July, I also did a beautiful wedding ceremony for an equally beautiful couple at the stunning Hacienda San Jose. It was quite nice to see a lot of famous faces amongst the guests – a Coronation Street star and a former Olympic rower! They were a really lovely bunch and the highlight of the ceremony was when the bride and groom’s nieces and nephews read a poem which they wrote, in which they called the bride a ‘princess’ and told the groom that his ‘head was like a bum!’ Very funny indeed!

This summer I also had the pleasure of performing a vow renewal ceremony at the gorgeous Finca Luz del Sol. I don’t get to do them that often, as most of my ceremonies are wedding ceremonies, so it was even more special to do this ceremony for Lisa and Brian who were celebrating nearly 25 years of marriage. They were so inspirational and it was such a intimate ceremony with just their two daughters and the groom’s brother and his partner. I left there, walking on cloud nine, with a to-do list for my husband of how we should be over the next 25 years!!!!

Bonnie and Bryan’s wedding at Villa Bancales was also one to remember. Such a lovely couple and such a stunning venue for their intimate setting. Both their daughters were brides’s maids and Bonnie’s sister and brother-in law read ‘Words of Wisdom’ by Bill Swetmon, one of my favourite wedding readings, doing it in their own personalized style, which was very funny. Carla from Reviva’s brilliant on day co-ordination made sure everything ran smoothly, Laura Charles’ simply stunning decor was perfect as usual and  Jeremy Standley’s amazing photography captured the day effortlessly.

I wish I could mention every wedding I did this year, but I would be here all day. Every single one of them was special in their own way. I loved Charles and Clare’s vows and the way that Charles almost downed the wine for the wine ceremony in one and spilled some on his lapel, instead of taking a gentlemanly sip – it must have been the nerves. I loved Michael and Jessica’s fuschia pink theme and beautiful odes to each other. I loved Sam and Tarek’s humour and the fact that they still took the P out of each other, even on their wedding day, as did Kev and Paula! And that Gary split his wedding trousers right down the middle during the ceremony and all the guests and Marie burst out laughing, they would have never have known had he not told me!!! And I loved that Jemma and James cut a lock from each others’ hair, which they buried in their garden. I married two Ben’s this summer, two Brian’s (Bryan), two Paul’s and two Clare’s (Claire) but not all at the same time! Bree and Petra’s international affair in the Andalucian countryside and Mimi and Pete’s international affair in Ronda were both simply stunning as was Fiona and Claire’s intimate ceremony in Casabonerela.

Thanks again to all my wonderful couples for letting me be a part of their special day. And here’s to, 2011 and my many couples who will be letting me do the same!